On the eve of the UK’s Largest Dairy Show, the Bath & West Showground once again played host to the prestigious Dairy Industry Dinner, which included the presentation of the Dairy Industry Award.

The keynote speech was delivered by Mrs Minette Batters NFU Deputy President in which she called on Government to recognise the specific needs of the British dairy industry to ensure it remains competitive in a post-Brexit era.  Mrs Batters asserted that the policies must be right on trade, labour and a domestic agricultural policy.

This year the Dairy Industry Award was a slightly different award;

Just after the Royal Bath and West Show in June a prominent farmer, businessman and supporter of the Bath & West was killed in a freak farm accident doing what he loved best – farming.

Derek Mead campaigned hard on behalf of the dairy industry; speaking in 2015 he described all areas of British farming as being “on the floor” but said dairy farming had “been in crisis for the last 20 years and it’s about time it was sorted out”.

As Chairman of the Mead Realisations Group, Mr. Mead was instrumental in the creation of Puxton Park, near Weston-super-Mare with his son, Alastair, and the agri-focussed development at Junction 24, Bridgwater, with his daughter Kathryn, that has opened-up the West Country for numerous businesses that support the farming community.  His investment of £10m to help develop Sedgemoor Livestock Centre into one of the largest markets in country had “put new heart back in to the livestock trade” after foot and mouth.

The Dairy Industry Award 2017 was therefore posthumously awarded to Mr. Mead in recognition of his forthright and passionate contribution to West Country agriculture.

Outgoing Chairman of The Dairy Show, Mr Richard Calver was presented with a special award by Mrs Mary Prior and Mr David Cotton, the newly appointed Chairman. 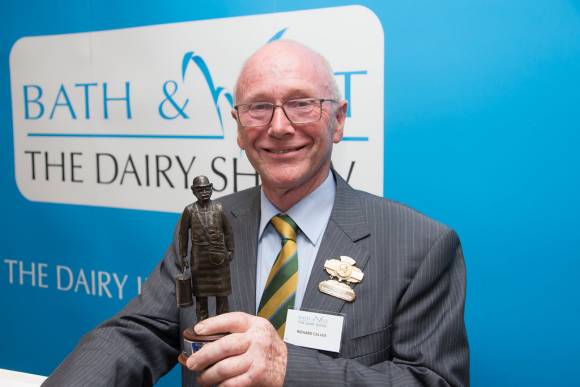