The heavy horse classes always enthrall visitors at the Royal Bath & West Show and though some are intimidated by the size of these animals, their handlers know these are gentle giants.

It takes a lot of time to not only prepare an animal for showing, but in training them from the very beginning – and horses require a lot of continual work to keep them fit and in shape, says head of shows, Alan Lyons. “Horse competitions always bring in the crowds and the heavy horse classes this year are expected to show off some of the biggest and finest animals the country has to offer.” 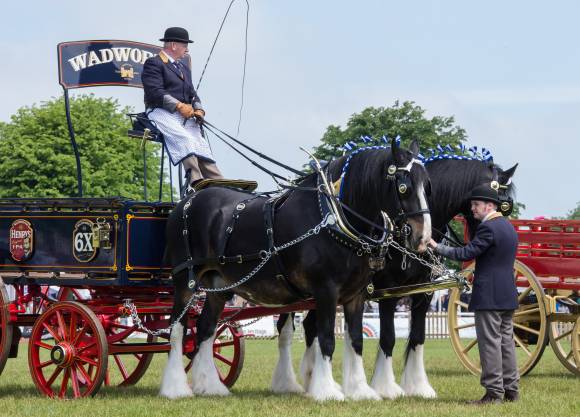 Judging the heavy horses at this year’s Show is Hazel Gordon, a woman who has spent most of her life around these majestic creatures and has a fine eye for their qualities. “My grandfather worked Shire horses when I was little and at four years old he put me on my first pony. It became his passion to get a Shire to show and in the late 1960s, he got his first mare from Robert Brittle in the Cotswolds.”

To begin with the family were lucky to get third or fourth place at shows but when they began to breed their own, they started to win. Hazel has shown and bred horses with her grandfather and father and her daughter, Emma, continues it now.

Hazel has become a prestigious breeder with her Blackden stud producing the likes of Daytum Commander which was sold to a buyer in America. On top of this, her judging career has taken her as far afield as Germany, Switzerland and Australia. “I call it a lifelong passion.”

In the UK she has judged the National Spring Show twice. “It was a great honour to be asked as it’s our biggest show.” She has also been nominated to judge the Sydney Royal Show in Australia next year and is very excited to be judging at the Bath & West. “It’s one I have never judged at before so it’s a great honour and I’m quite excited.”

When judging, Hazel always starts at the head. “I want a good strong, bold head and an arched neck. Hocks need to be high off the ground and the feather needs to be long and flowing.” She also likes big hooves as the animals are so big, they need hooves that will hold them well. “Hocks also need to be flat and not fluffy and then when they go into action I want them strong and straight,” she explains “I want to see the hocks almost touch when they are trotting away from me. Generally I’m looking for an outstanding animal.”

She advises that exhibitors wash out the feather – the bushy hair on the back of the horse’s leg – gently and thoroughly, and when plaiting it’s important the keep the head and neck still to get a nice line down to the wither. “If you look after them well then they look after you,” she explains. “It’s very rewarding if you spend the time with them as they are lovely animals to work with.”

Hazel likes to encourage the younger generation to get involved with heavy horses as she feels the breeds are lacking interest from younger people. “It’s marvellous to show them to people who don’t have animals or may not have seen horses before. Shires are great horses to be about and I think showing is mainly about promoting them. They’re a great part of history in England.”