The music talent at this year’s Royal Bath & Show is stepping up a gear, with BBC Radio 2 Folk Awards winner Sam Kelly confirmed to headline the Pilton Tent on the opening day of the Show.

Popular West Country band The Leylines and Noble Jacks from Brighton, both of which have previously played at the Glastonbury Festival, will be the headline acts on the Thursday and Friday respectively. Meanwhile, Bristol-based Imprints will be returning to close the show on the Saturday, having been a huge hit at last year’s event.

In a fallow year for the Glastonbury Festival, this year’s music line-up at the Royal Bath & West Show will be welcome news for music fans and festival-goers across the South West, comprising almost 24 hours of live folk and rock music in the Pilton Tent alone during the four day event.

Singer-songwriter Sam Kelly, who was a finalist on ITV’s Britain’s got Talent in 2012, has since become one of the most exciting young prospects in the folk scene. Along with musical collaborator Jamie Francis, who will be performing with him at the Royal Bath & West Show, they have gained a reputation for their dynamic live shows. Sam commented, “We’re really looking forward to playing at the Royal Bath and West Show – it’ll be a great chance to play to a new audience. I grew up working on my family’s dairy farm so am hoping we get to see some lovely cows while we’re there too!”

Now in its 155th year, the Royal Bath & West Show is not only one of the biggest agricultural shows in the country but it will also be the largest event taking place in Somerset this year. In addition to a full programme of live music in the Pilton Tent, there is an eclectic range of music and entertainment across the Show, from military bands and Morris dancers through to brass band street entertainment from the eye-catching Ambling Band. The family-friendly event has camping available on site for those wanting to really make the most of the vast range of entertainment on offer. 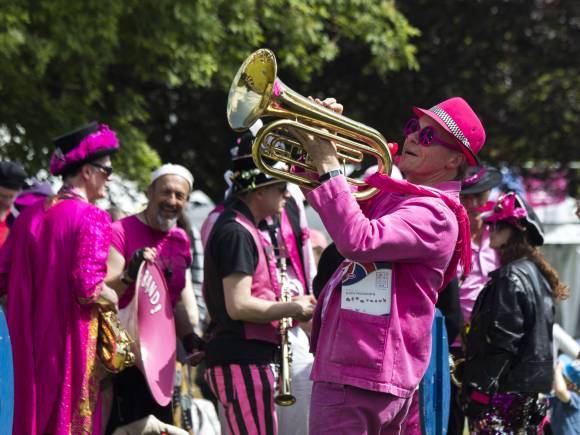 Rupert Cox, Chief Executive, said, “The Pilton Tent has become the hub of the Show, with a packed line-up of great music throughout the four day event, and scrumptious food & drink surrounding it on all sides. Thanks to the support of our past president, Michael Eavis, we have been able to give around 20 West Country bands the opportunity to perform to thousands of visitors at the Show, providing a great festival feel. As well as seeing the animals, our visitors tell us they want to taste great food and be entertained, and the Pilton Tent certainly delivers on these two fronts.”

Glastonbury Festival founder Michael Eavis added, “I’m glad to see that the Pilton Tent is so successful. After wandering around the show for a few hours, there is no better place to sit, rest, eat some food and listen to some really good music in this beautiful tent!”