Food and drink is a key part of the Royal Bath & West Show, with a tremendous showcase of top quality local suppliers, many of whom have their origins firmly within the farming community.

Food and drink is a key part of the Royal Bath & West Show, with a tremendous showcase of top quality local suppliers, many of whom have their origins firmly within the farming community.

One of the must-sees for foodies at this year’s event is The Meat Men. Established last year by master butchers Scott Cartwright and Edward Davies, they will be serving all manner of quality meat for visitors to enjoy.

“The Bath & West Show is local for us, I’ve shown and judged cattle there,” says Edward. “We know a lot of people that will be attending and with the agricultural side it brings a lot of potential customers.”

Edward keeps a handful of Limousin show cattle which he shows at various events around the country, winning the championship at Agrifest and Newbury Show in the past few years. “I won’t have time to show them at the Bath & West unfortunately,” he laments.

Edward got involved in the family butchery and abattoir after leaving school aged 17 – and that’s where he met Scott, who was working there as a butcher. It was around this time that he got involved with cattle showing and judging with his local Young Farmers Club, which gave him a real understanding of what butchers are looking for.

Fast forward 11 years, and the pair reunited after a spell of travelling, during which Scott brushed up on his butchery – learning different skills abroad. Once back on Somerset soil they decided to set up a new business – The Meat Men. Although both only 28, they have the ideas, aspirations, skills and experiences that set them apart from their competition.

Edward buys all the livestock for butchering from Sedgemoor market, relying on his stock judging knowledge and his time as a butcher to pick the best. “I know what’s good – people that don’t have that knowledge of meat can’t guarantee the quality – we can,” he says. “We like Devon cattle – native breeds. I know if they have been fed well and we’re ideally looking for marbled meat.”

The pair have tested their stall at a few events over the winter and feedback has been excellent. “Once people have tried the meat they’re sold on it; it’s good quality meat with a story,” says Scott. “We sell regularly into farm shops, village stores and pubs.” 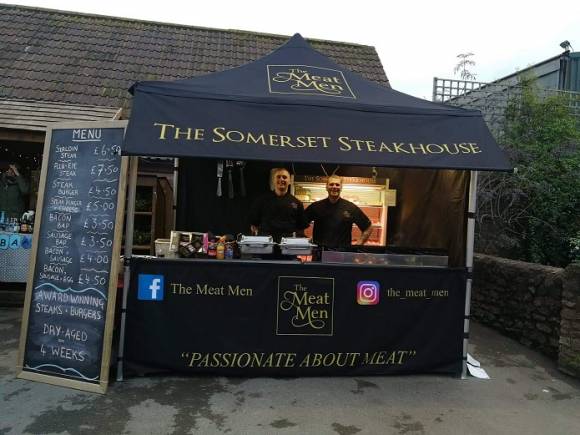 They also operate a delivery service around the country. “We deliver right up to Scotland and Yorkshire, with a courier we can deliver anywhere in the UK,” he adds.

And they have a few awards under their belts too, after coming away from the steak competition at Agrifest in Exeter last year with a gold and two silvers for their ribeye, sirloin and steak burgers, respectively.

So, what can you expect from their stand at the Show? Ribeye, sirloin and rump, dry aged steak burgers and sausages served in crusty bread with a good helping of salad. It’s a labour of love for Edward and Scott and they took their time finding the right bread, too. “The right bread can make all the difference and luckily we found a local bakery which ticked all the boxes,” says Scott. A favourite with the stockmen at shows is the breakfast roll, he adds. “This contains sausage, bacon and eggs; free-range from a local farm of course.”

The business is a real family affair and the boys have roped in their girlfriends and mothers to help on the stand at the Show. If you like what you try, they have prepacked meat available too, which they can keep refrigerated until you’re ready to pick it up.

But if local meat just isn’t your thing, there’s plenty of other food and drink on offer at the Show. From vegetarian and vegan delights at the Authentic Indian Cuisine stand to Green Bean; the gluten-free, dairy-free specialists, there is something to whet everyone’s appetite.