Crafted on an organic dairy farm, 800 feet up on top of the Gloucestershire Cotswolds, Ashcombe was created during lockdown, in response to the extreme challenges endured by cheesemakers during this period. Faced with the need to utilise thousands of litres of milk that would otherwise have to be poured away, head cheesemaker, David Jowett decided to use the milk to produce a larger, longer aging cheese.

Ashcombe is a large, flat, disc shaped cheese, featuring a striking line of wood ash running through its centre. The cheese is washed in a special brine solution to develop a bright terracotta rind and aged for 2-4 months. The rind is meaty and savoury, while the paste has aromas of warm milk and hay. The flavours are comforting and rich, reminiscent of melted butter and fresh hazelnuts.

Trophies were awarded to all category and national winners during the British Cheese Awards Dinner on the evening of Wednesday 5 October, with the Reserve Champion cup going to St.Jude by St.Jude Cheese in Suffolk.

Julius Longman, chairman of the British Cheese Awards, commented: “We are truly delighted to have brought the British Cheese Awards back following a two-year Covid-enforced hiatus, reuniting the UK and Ireland’s cheese community once again to celebrate excellence in our craft. Cheesemakers faced unimaginable challenges during the lockdowns, forcing them to innovate in all sorts of ways to survive, and this is evident from the many new and interesting entries that won prizes at this year’s competition. Our Supreme Champion, Ashcombe, embodies this beautifully, as it was produced in direct response to the need to store a sudden glut of milk in a larger, longer aging cheese. David and his team created something extraordinary in the process – a very worthy winner of the British Cheese Awards 2022 trophy.”

David Jowett, head cheesemaker at King Stone Dairy, added: “We are all completely overjoyed to hear the news of Ashcombe having been awarded Supreme Champion at this year’s British Cheese Awards. A cheese born out of adversity as recently as 2020, Ashcombe is a celebration of this farm and the people maintaining this landscape, as well as the dedication and continuous strive for excellence within our cheese making and maturation team. For our small team of cheesemakers, to receive this award is an honour, a delight, and an extraordinarily invigorating token of recognition.”

Organised by The Royal Bath & West Society, the 27th edition of the British Cheese Awards saw over 500 entries judged in a single day, as the competition took place during The Dairy Show for the very first time. Among this year’s entries were 20 brand new cheeses that have been created since the awards last took place, representing the sudden boom in creativity that was witnessed within British cheese, following huge losses in business as the hospitality sector was closed down during successive lockdowns.

A 50-strong judging panel made up of cheesemakers, cheesemongers, cheese experts, buyers and commentators assessed entries in their individual classes during the morning session, awarding Bronze, Silver and Gold accolades to deserving products from England, Scotland, Ireland and Wales. During the second round, all Gold award winners from each category were judged alongside one another to identify the category winners, before all category winners are judged during the final round to find this year’s Supreme Champion and Reserve Champion. 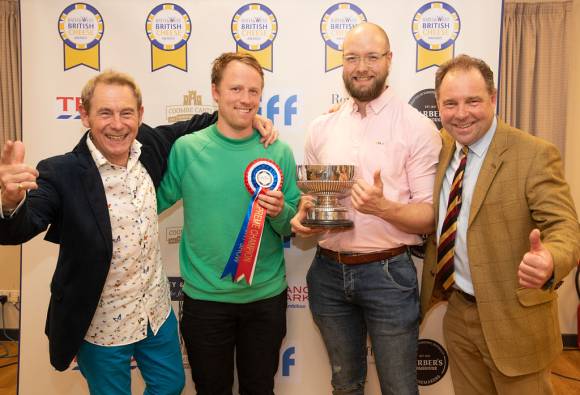