The Art of Falconry Lives On!

Falconry is an historic past time and one of the oldest sports in the world. It can be tracked back to 2000BC in the Middle and Far East. Originally it was used for catching food and not a sport. The popularity soon grew and was generally classed as a sport for royalty

Falcons look clever because they have forward-facing eyes. This is to give them binocular vision for depth perception. In fact, in our terms they are not very intelligent, as they only need to catch another bird or animal to survive. Something like a parrot or a raven doesn’t look as clever, as their eyes are on the side of their heads. This is so that they can see predators behind them, but they are much more intelligent. As their food is more diverse and may be more difficult to obtain, such as nuts in a shell, these birds can solve problems and imitate behaviour to locate and achieve this goal. Consider a raptor as a shark, but with feathers

Falconry is not thought of now as a sport for royalty. Instead it is carried out by dedicated individuals, helping to preserve this ancient and historic practice for future generations. One such individual is Ben Long who obtained his first kestrel in 1971. At that time there were very few falconers in Britain. He has been involved in falconry as a professional for over 30 years and is a director of The Falconry School based near Gloucester. 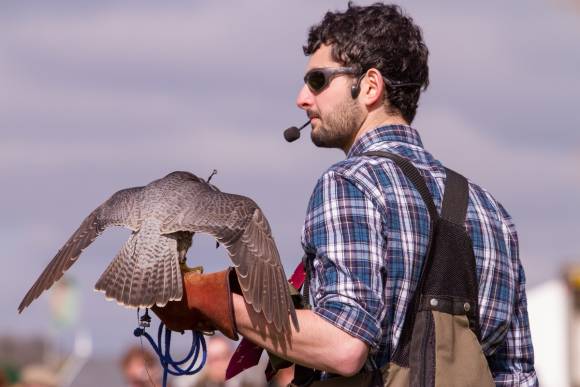 Ben will be providing demonstrations and a static display at the West of England Game Fair, taking place at the Bath & West Showground on Saturday 18th & Sunday 19th March 2017. The latest innovation in the world of falconry is the use of radio-controlled “prey”, and in the last year or so The Falconry School has been in the forefront of testing these devices. The demonstrations will focus on simulated hunting with Harris Hawks, Falcons plus stooping to the lure. Of course there will be some audience participation which will bring the audience as close as possible to the Art of Falconry.

With the opportunity to grab great show offer on guns and accessories, fishing equipment, gundog equipment, game feed, gifts, clothing, paintings, prints, food and much more in the indoor countryside shopping village, this is the perfect day out for all the family

You can keep up to date with everything happening at the show by visiting www.westofenglandgamefair.co.uk

For details of events taking place at the Bath & West Showground in 2017 head to www.bathandwestshowground.com