A single variety bottled cider made from the famous old Dabinett cider apple has been crowned Supreme Champion British Cider in the British Cider Championships at the Royal Bath and West Show.

It is produced by Harry’s Cider, a family business, based at Long Sutton near Langport in Somerset.  Harry Fry has been making cider on his small farm for around 15 years, but it is only in the last five years that he, his partner Alison and son Toby have been producing bottled cider on a commercial scale.  Since then, they have won numerous awards for their ciders, which combine the best of traditional values with modern techniques, using the best possible bittersweet fruit.

“This is just amazing”, said Harry Fry after receiving the Fruiterers’ Trophy for Champion British Cider from the Master of the Worshipful Company of Fruiterers, John Warner.

“We have known for a long time that our Dabinett was a pretty good cider, but I never thought we would win what is the pinnacle of the British cider industry.”

“Ours is very much a family business, and I certainly couldn’t have done this without my partner Alison and son Toby.” 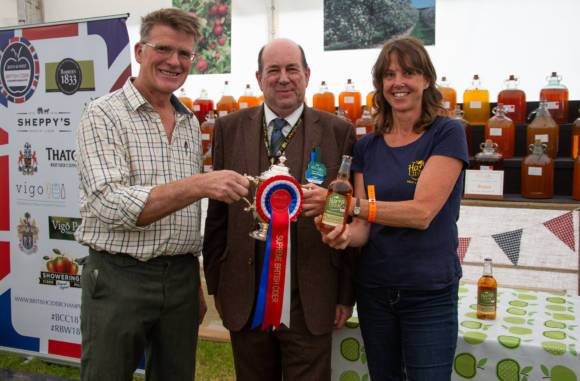 The runner-up was a naturally sweet sparkling cider, produced by the Halfpenny Green Cider Company of Bobbington near Stourbridge in the West Midlands.

Nick Poole, of West Milton Cider in Dorset, followed up his success in winning the Supreme Championship last year by taking the Pewterers’ Trophy for Farmhouse Cider with his Medium draught cider.  Relative newcomers to cider-making, Crest Cyder of North Curry near Taunton, were runners-up, with their Sweet cider, which also won a gold medal as the best Farmhouse Sweet.

The Lawrence Reilly Cup for best perry was won by Herefordshire’s Tom Oliver, widely acknowledged as one of the best cider and perry makers in the country, as well as being a fount of knowledge on the history, traditions and skills of perry-making.  A perry produced by Kington Cider of Herefordshire was runner-up.

Orchards and Cider celebrates and promotes top quality apple juice as well as cider, and the Vigo Trophy for best apple juice was won by one of the most famous names in the West Country cider world, Hecks Farmhouse Cider, of Street, with Kington Cider again as runners-up.

This year saw the introduction of the Best Newcomer Award, which was won by Roger and Karen Blake of Devizes, who plan to start selling cider commercially next year. They said “we are totally astonished and really pleased to have won, and the camaraderie and good advice that we have received from the cider-makers we have met here at the Bath and West has been just outstanding”

Winners in the Winning Orchard Awards are as follows, with each of the winners receiving a Bath & West Show Silver Medal:

Orchards and Cider Chairman, Anthony Gibson, said that the quality of the 600 plus entries in this year’s championships had been higher than ever.

“It has been hugely encouraging to see so many new names among the prize-winners this year, and with ciders from places as diverse as Cheshire, the West Midlands and Guernsey winning awards this is truly a national championship.”