A selection promising young vets will be battling it out for the prestigious title of Dairy Industry Vet of the Future at this year’s Dairy Show, having been shortlisted out of the brightest and best of the industry.

“Vets are an important part of any dairy farm, and this competition recognises the best dairy vets for the future,” says Alan Lyons, head of shows at the Royal Bath & West Society. “The role which dairy vets play on farm has changed dramatically in recent years, with a greater focus on disease prevention and healthy herd planning. They are integral to the success of our forward-thinking industry and it’s only right that we celebrate that commitment.”

Competitors are judged on the research project produced in the final year or their studies, with the finalists interviewed by a panel of judges including Mike Steele – ruminant vet and technical director at Micron Bio-Systems, which is sponsoring the award. The winner receives £1000 and a trophy while each runner up gets £200.

“We are delighted to be involved in this year’s award, knowing how much livestock farming relies on the capabilities and expertise of our vets on a daily basis,” says Mr Steele. “Their role in protecting the health and welfare of the cattle population without compromising the individual animal is a tough challenge, which they work hard to fulfil.”

“The ability to adapt in a changing agricultural environment and respond to the needs of the farmer is what makes a vet of the future stand out from the rest.”

Last year’s finalists were Rebecca Dodd, Holly Hills, Catrin Davies and Henry Miller, who submitted projects on various subjects from lameness to methane emissions. The eventual winner was Miss Davies, based on her project on Johne’s disease in the current economic climate.

Judges commented that Miss Davies’ project brought up more questions than it answered but also indicated that there is some research which could be used to stop the effects of the disease.

She graduated from Liverpool University last year. “I was mentored by my lecturer Dai Grove-White and he was keen for me to try for the competition. I didn’t expect to get to the final, let alone win,” she says.

Now employed in a mixed practice Aberystwyth, the award has had a positive impact on her work. “My bosses have been telling everyone I won the award; as a new graduate I’m more respected. I aim to work alongside farmers rather than just telling them what to do.”

Even being a finalist for the award has brought its benefits too. For Holly Hills it enabled her to take on more lameness work at her practice and training on mobility scoring. “I now do a lot of mobility scoring and that means I get to go out on dairy farms and get to know dairy farmers which I really enjoy,” she says.

All the finalists are invited to the Dairy Industry Dinner the eve of the Dairy Show and to a presentation on the day of the show – with an opportunity to see everything that the show has to offer.

“I was delighted to be invited down to the Dairy Show last year,” says Mr Miller. “It was a great opportunity to meet like-minded people, everyone was really welcoming and chatty.”

“These talented young vets will take the dairy Industry forward, working with farmers on the health and welfare of their cattle to achieve optimum performance”, says Mr Lyons. “We’re delighted to play a part in the progression their careers and to recognise the important role they play in the industry.” 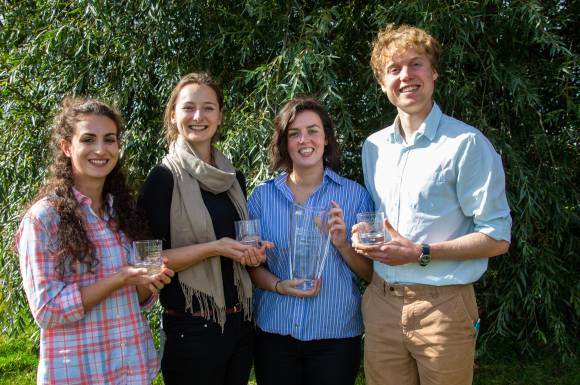