The Bristol Classic Car Show Welcomes Moore Than a Special Guest to the Showground on 18 & 19 June 2016!

It all started in January, 1991 at the home of Kevin Price, founder of the Volvo Enthusiasts’ Club with the phone ringing.

Kevin answers and when the caller tells him he has the P1800 that was used in the TV series The Saint he is extremely sceptical. But the voice on the line is adamant that this is the one.

Kevin had heard it all before, ‘Everyone with a white 1800 coupe thinks it’s “the one” – but there was just something about this one. 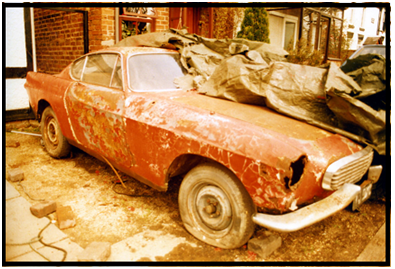 A few months later, he made the trip from his then Cornwall home to North Wales and a hill farm where the car was buried under thick brambles and disguised by badly applied rattle-can red, it was derelict, rotten and rusting. Hacking back the undergrowth, Kevin was finally able to read the black & silver numberplate. 71 DXC confirmed that it was the original car used in the very first episode of the TV series – The Saint’.

Kevin knew this was a chance in a lifetime opportunity. It took a further 6 years to negotiate the sale and he finally moved the famous car to his father’s home in the Midlands in January 1997.

An extensive evaluation of the car was made showing that it’s condition was far from when Roger Moore, alias Simon Templar, had slid into those seats, chasing hoodlums and righting wrongs. All the external panel were rusty. The engine was on the back seat in bits, gearbox in boot and tyres collapsed, where the rims dug into the earth.

‘It was a total and utter wreck,’ said Kevin. ‘It had no right to be saved – it wasn’t even good enough for scrap.’

But this was the iconic first car.  The ‘original’ that Roger Moore had fallen in love in a Mayfair Volvo Dealership, when Jaguar refused to supply an MK10 Jaguar for the programme.  The car that he would be seen in the opening sequences of the first episode, driving down Cookham High Street and into the car park of the Ferry Inn in ‘The Talented Husband’.

Over the following 10 years Kevin collected the various parts that would be needed for a full restoration of this iconic car, until the ST 1’ the ‘Original’ Simon Templar TV Saint Car finally returned to the road in September 2013 following an epic six year restoration.

This incredible car has been the highlight of many car shows across the country and will be making an appearance at the Bath & West Showground for the Bristol Classic Car Show on the 18th & 19th June.

For more on the Bristol Classic Car Show, and the other fantastic events that find their home at the Showground, click here