Still Rocking & Rolling After All These Years

So appalled were the organisers of the Bath & West Society by the drunkenness, drug-taking, free love, police intervention and­ probably the worst crime of all – litter, they swore never to repeat the exercise.
Before you reach for a defibrillator, this was in 1970 and was not the familiar agricultural gathering but a ‘Progressive Music’ festival on the then recently acquired showground – the committee thought this novel idea would swell the coffers. 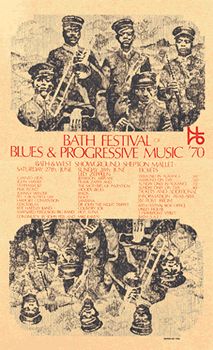 The problem was that it was absurdly successful: 150,000 raucous, rain-drenched fans found rock royalty such as Pink Floyd too much to resist, even if it was in a bucolic backwater more used to the gentle lowing of Friesians than the  screeching  decibels of amplified electric guitar. For one member of the crowd, it sparked an idea that was to take off beyond his wildest dreams. Nearly 50 years later, the story comes full circle as that farmer, Michael Eavis, the founder of Glastonbury, was President of the Royal Bath& West Show. He pointed out the spot where, listening to The Moody Blues, he had his epiphany – now, more than a million people are registered with the Glastonbury website.

‘This year, tickets sold out in 20 minutes,’ Mr. Eavis told us. ‘Extraordinary really.’

It sounds as if he still can’t believe the success of the festival at which anyone is anyone has played.  Spare a thought for the erstwhile apoplectic Bath & West bigwigs and thank them for their gift to popular music. 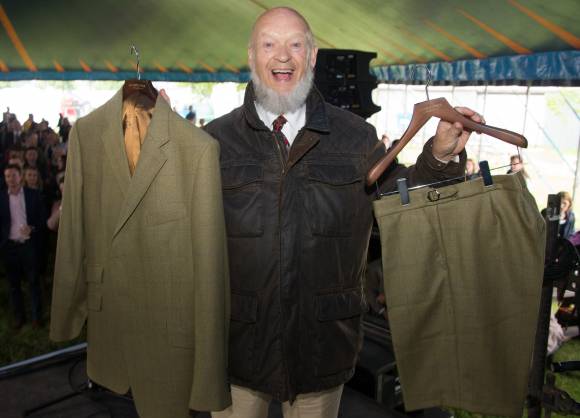 Like a children’s  flip book in which a giraffe head ends up with a buffalo body, Mr. Eavis maintained well-dressed country gent on his top half, with a tweed jacket and striped Society tie, but, below the waistband, it was denim shorts and sandals. With his Amish-style beard, twinkling eyes and ready laugh, he brought showman magic to England’s biggest agricultural show.

New bands he had spotted played on the acoustic stage, but this audience was demure, chomping on local sausages, cheeses and other delights from the newly reconfigured food hub. The Ambling Band popped up in different locations with their saxophones and folksy-funk style, even leading the chief stewards in a midnight conga. 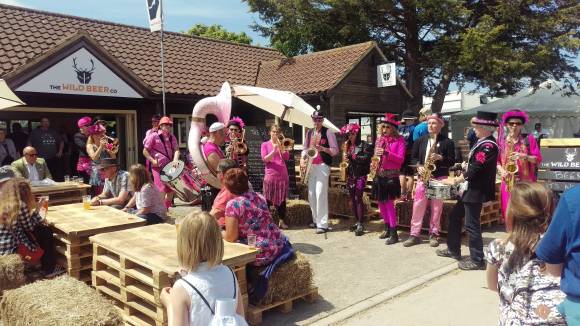 In the art pavilion, the Lord-Lieutenants of Devon, Somerset, Dorset, and Wiltshire combined to choose their favourite painting.  Elsewhere, things got more political.  A senior civil servant observed that there were far more Vote Leave posters in the area than in London.  Certainly, local MP Jacob Rees-Mogg was happy to pull up a straw bale to make his point and former Defra Secretary Owen Paterson was in the CLA marquee expanding on why we should leave the EU.

Taking the opposite view, the present Defra Secretary, Liz Truss, who was photo-bombed by the rear end of a pig last year, didn’t risk any interaction with cochons this time; but met with their representatives instead.

If there was a sense that the vultures were circling, it’s because they were, in the countryside arena. In fact, the circles got wider and wider: after a week on the loose, the bird finally touched down at the Royal Naval Air Station at Yeovilton.

Actor Martin Clunes, President of the British Horse Society, couldn’t wait to pat and engage with any passing animal.  He adored the heavy horses, swooned at Red Ruby Devon cattle and laughed out loud at Pony Club mounted games, in which teams had to dress up as pantomime cows.  When the photographer made mooing noises to interest a bovine cup winner, Mr. Clunes, who has been generously blessed in the aural department, exclaimed: ‘Surely you don’t want my ears any more forward?’ 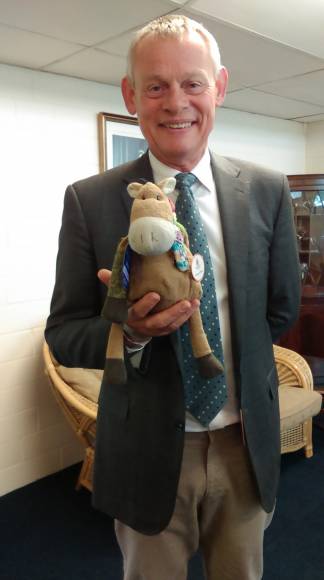 Volunteer stewards are the lifeblood of any show and new blood is vital.  A young man from Cirencester’s Royal Agricultural University had been drafted to the horse stewards. When I asked him what his job had been, he replied: ‘I was the leg-up steward.’ (This means that he assists the ride judge  in the showing classes.)

‘I was sacked after the first class because she kept saying “lift me on the count of one”, but, frankly, she didn’t hop in a helpful way. The next judge was more amenable and I think I’ve cracked it now. I did 65 leg-ups on the first day.’ I consoled him by revealing that I started off doing much bending and lifting, as assistant steward of litter.

I try not to be competitive about the Bath & West, but, on the final day, a former president of the Great Yorkshire Show said that he thought they had more people attending. ‘What, at your three-day show?’ I asked.  At the end of the day, he admitted that he had much enjoyed our ‘fourth day’.  It may be more for cattle, sheep, and cheese than for Pink Floyd, but, for the record, the attendance remains steady at about 150,000. 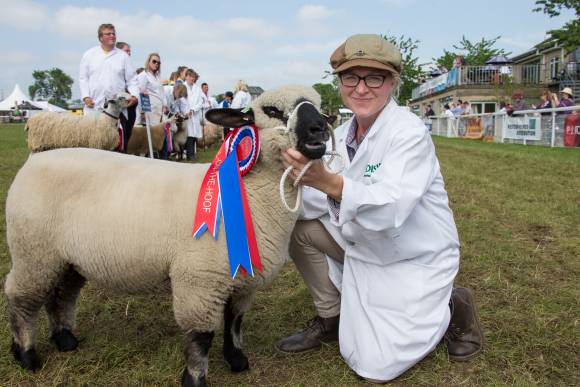 This article appears in its entirety in Country Life, June 15, 2016.