The Royal Bath and West of England Society’s Gold Medal, for an outstanding contribution to the cider industry, was presented to John Hecks, of Heck’s Cider

The Royal Bath and West of England Society’s Gold Medal, for an outstanding contribution to the cider industry, was presented to John Hecks, of Heck’s Cider, at his home in Street.

The presentation was made by the Royal Bath and West Show’s Orchards and Cider Chairman, Anthony Gibson, and Chief Steward, Bob Chaplin.  It would normally have taken place at the show, but Mr Hecks was unable to attend owing to an accident on the farm shortly before the event.

“Whilst it was very kind of Mrs Mary Hecks to accept the Gold Medal at the show on John’s behalf, it is even more of a pleasure now to be able to present it to the man himself”, said Mr Gibson. 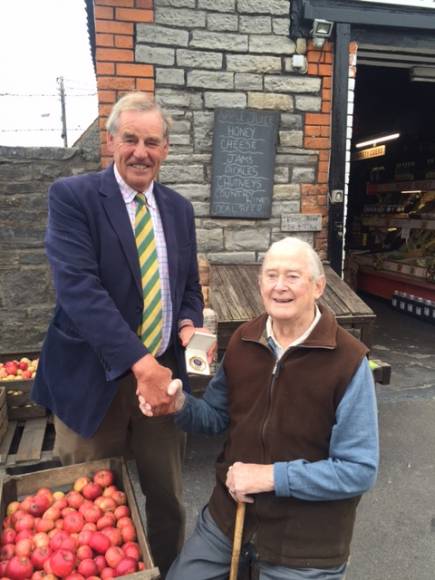 “John Hecks is a living legend in the cider world:  a master craftsman, who has stayed true to his principles throughout his long career.  He is both a traditionalist and an innovator, who was one of the pioneers of single variety ciders.  This is effectively a lifetime achievement award for a man who has been both a standard bearer for Somerset cider, and a role model for the new generation of artisan cider-makers.

“His contribution to the cider industry in Somerset and beyond has indeed been outstanding, and we are delighted to be able to recognise it with this Gold Medal.”

Mr Hecks, who is 82,  said that the award was “really very special”.

“However, I see it as recognition, not just of my efforts, but those of the entire family, all of whom play their part in helping us to produce the best cider, from the best apples.”

Heck’s Cider is very much a family business.  John is the fifth generation of Hecks to make cider, the family having moved from Chard to Street in 1896.  As well as John and his wife Mary, their two sons, Andrew and Christopher, are also involved in the business, together with their families.