Crack Out the Linseed Oil

As the clocks spring forward an hour for summer have a peek around the villages of our wonderful region and see if you can spot a hive of activity around the playing fields.

In most cases you will, as the cricket season is upon us once more and we are only weeks away from witnessing one of  England’s quaintest characteristics – the sound of leather on willow and shrieks of “Howzat!” from the village cricket field.

I have already been up in the loft and turned out my “whites” ready for another season with Long Sutton Cricket Club, and while becoming quite aged for this youthful mob, it is still very close to my heart having played for them since my teens; captained both the 1st XI and 2nd XI, chairman for a number of years, and for sixteen energetic years worked with the younger players as a youth coach. While seeing my last crop of 8 yr olds now making a major contribution to the 1st XI makes me feel rather old, it is also very satisfying as the game is safe in their hands. Being well passed my first half-century the pleasure earned from cricketing exploits stay with us old geezers forever.

Local derbies at Huish & Langport, Curry Rivel or South Petherton come with the typical spice one might expect from Bath vs Exeter rugby or Yeovil Town vs Bristol Rovers football, but cricketing friendships built up over nearly forty years remain for long after we have hung up our boots – even if our recollections of particular matches vary, the warmth of the game lingers long! Further afield the Somerset Cricket League fixture list has taken me to some glorious spots where the cricket is often overshadowed by the picturesque surroundings where the game is played with some of my favourites being Barrington, Butleigh, Kilve and Sparkford, and while the best cricket is, not surprisingly, played in our major towns the characters of game are found out in the wilds of Somerset on variable pitches either out in the middle of nowhere or wedged against a village hall that acts as both changing room and tea pavilion.  As is the case at Spaxton where the captain (whose home abutted the ground) used to jumped over the wall and go home for tea rather than eat with his team if they had not played to his satisfaction.

As a steady trundling bowler of rotund build I rarely got the luxury of bowling “down the hill with the wind”. Instead, if there was a slope in the pitch G R Cox was usually bowling up it. I can remember some pretty tortuous afternoons “leaning into the hill” at my own Long Sutton, Shapwick, Leigh on Mendip, South Petherton and Temple Cloud, all playing host to a slope of note! 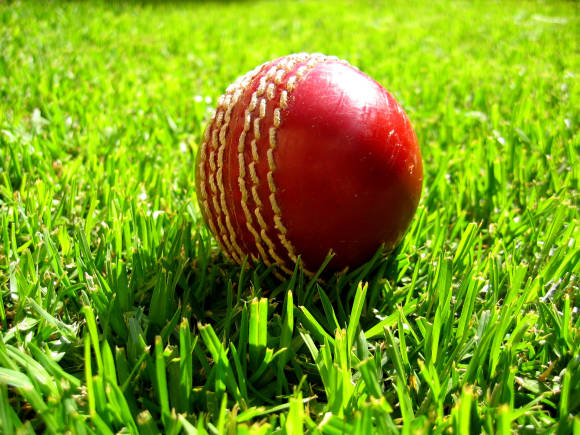 Batting of course is a different kettle of fish! The aforementioned bodily characteristics mean that while my batting style is distinct, and some coaches my argue “extinct”, it is always entertaining and a conundrum that has left many an opposing captain scratching what little hair they might have as to where to place the fielders for best effect. In my prime this would have been in the neighbouring corn field! My son, who is never short of a word or two on the cricket field, has been known to heckle his own father with phrases such as “he’s only there for a good time, not a long time” or is heard shouting “Mooo!” in reference to a rather uncomplimentary “cow shot”.

So as my career enters its twilight, I can look back on some wonderful memories of games won, games lost, promotion achieved, relegation endured and friendships made in highly competitive confrontations with a cold beer when the final run has been scored or wicket taken.

For any readers who have not understood a single word of this; make time! Make time this spring to tour around the playing fields of the West Country to witness wickets being mown and rolled in readiness for the start of another promotion chasing season. Regular readers will know of my passion for the unsung volunteer and across the cricket fields of Somerset this is no exception. Those chaps mowing and rolling are often not players but lovers of the game, lovers of their Club and lovers of their village; these are the unsung heroes of the sport of cricket as without a cricket wicket on which to play, there is no cricket to be played, watched and enjoyed.

I must sign off now and get some linseed oil on my aging willow.